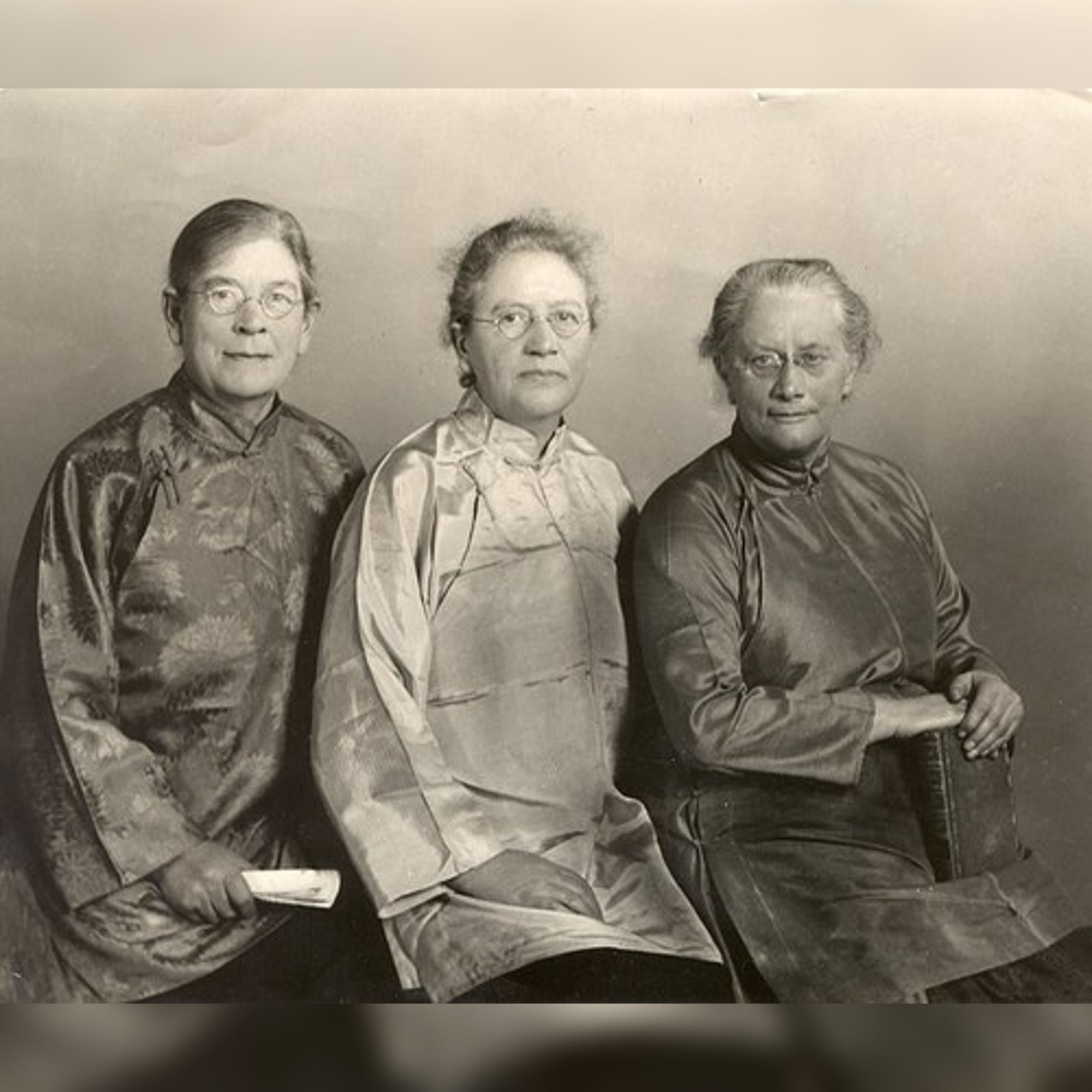 Mildred Cable Was Not Alone In China...

Mildred Cable’s remarkable story (see my blog about her) is not complete without mentioning the two sisters with whom she co-laboured, Evangeline (Eva) French (1869-1960) and Francisca French (1871–1960). They worked together in China for several decades. They never split up and went their own ways. In missionary terms, that is somewhat remarkable!

For their first 20 years, they taught in a large girls' school in Huozhou 霍州, Shanxi. Their educational ministry under the China Inland Mission was successful and well ordered— described as “a lovely campus, very adequate housing facilities, and cooperative fellow labourers.”

Then they handed that work over to Chinese educationalists, and all three of them embraced together a call to a very different lifestyle - a call to the desert.

"Mildred Cable and her two companions did what no other missionaries had done in reaching out to the remote, isolated areas of the great Gobi Desert. With only a tent, a kettle, a frying pan, and three sleeping bags, as well as a sizeable load of Bibles, they travelled the Gobi for 16 years until 1939, encountering revolutionary generals, bandits” - and much else!

Mildred Cable met Eva French when she first arrived in Shanghai. Eva was returning to China following her first home leave. Eva's younger sister, Francesca, joined them in 1910 (although some sources say 1908). She had been delayed in coming to China whilst caring for her dying mother in England.

“As single women and Christian missionaries, their lives were bound together so strongly that they were inseparable. The three loaded their cart with Christian literature and traversed the Silk Road alone or with a few Chinese colleagues. They called themselves ‘The Trio’ as they crossed and re-crossed the deserts and plains of Western China. Hundreds, if not thousands, of Chinese villagers knew them as kind and patient teachers.”

“The Trio” were independent, strong-willed and bold women. “Eva French was criticised for giving communion to her Chinese congregation on Christmas Eve 1924, celebrating Communion being considered a male prerogative. Uncowed by the criticism, Mildred Cable celebrated Communion the following Easter."

As a child, Eva was a rebellious extravert, fiercely independent and strong-minded. “Aged six, on her first day of school in St Omer, France, she somehow escaped from her teachers and managed to climb up onto the high wall of the school enclosure. Black-robed convent sisters beseeched her to come down. Mutinously, Eva refused to yield until certain promises had been made, chiefly concerning the supply of chocolate and a complete amnesty from punishment.” “Rebellious defiance was the breath of her nostrils.”

But then she encountered Jesus. “The preacher, the choir and the congregation simply ceased to exist, and she felt herself to be alone with Christ.” In 1893 she boarded a ship bound for Shanghai to join the China Inland Mission.

Francesca, Eva’s younger sister, was by nature much quieter than Eva and more responsible. She applied herself more diligently to her studies. “Exuberance was profoundly distasteful to her, emotionalism repelled her, and such loss of control as a fit of temper was a supreme disgrace.”

Statistically, fallout in missionary relationships is a common form of attrition and loss. Even Paul and Barnabas split up because of a breakdown in relationships (Acts 15). But these three laboured together in extreme situations of difficult living and danger in China for more than 30 years! How could such strong personalities remain working together?

1. All three met the Lord Jesus and were clear that He had called them to mission. “Duty was transformed into inspiration when Francesca went with Eva to a Christian meeting. There Francesca knew that she, too, wanted to become a missionary. When Francesca joined Mildred and Eva, the three formed a bond that no fanatical warrior or bloodthirsty mob was ever going to break.”

2. They trusted themselves to the Lord in His plans for their lives, and He extended His Hand of protection and blessing (Psalm 57:9-10).

3. Differences in character and gifting, if broken before the cross of the Lord Jesus, can be very much an advantage, not a hindrance.

4. There was structure in their relationships. "Mildred was the 'father figure’, Francesca the mother, and Eva the strong-willed, puckish and wonderful child.” There must be defined and accepted leadership structure.

5. They never lost their shared vision to win men and women to Jesus. “Some listened attentively but soon forgot. Some listened with contempt. Some listened, longed, and took Gospel portions back to their remote dwellings, hiding them under their flowing robes. Mildred, Eva and Francesca carried nothing but their Bibles and their combined faith.”

Mildred once said: “if the missionary once let himself consider fear, he would spend his life in a panic.”

Oh, that we would see more such teams in cross-cultural mission today!