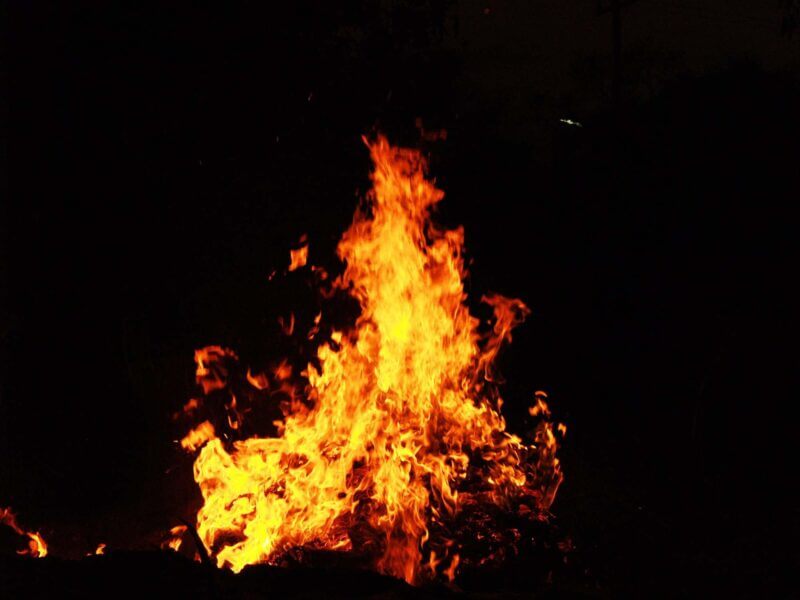 John 18:15-27 continues the narrative of Jesus’ path to the cross. Today the spotlight shines on Peter. If it’s shining on Peter, it also is shining on us. At the heart of the passage there is such a powerful metaphor, one that is so worth pausing to consider. Verse 18 says: “Now the servants and officers who had made a fire of coals stood there, for it was cold, and they warmed themselves. And Peter stood with them and warmed himself.” In case we miss the point, verse 25 says: “Now Simon Peter stood and warmed himself.” John only uses that word ‘fire’ twice, and this is the first use.

This is where Peter three times denied Jesus, once probably to a teenage girl. He did that, says John, as he warmed himself by a fire which had been lit by those who were the enemies of Jesus or those who were indifferent to the astonishing injustice that was taking place before their eyes.
In John chapter 21 there is another fire. After Jesus had risen from the dead, He meets with Peter again. John 21:9-10 says: “Then, as soon as they had come to land, they saw a fire of coals there, and fish laid on it, and bread.” It is at this second fire that Jesus encounters Peter with those searing questions “do you love Me?” We'll come to that later; the specifics of that conversation are for another day.

For now the point is a simple one: at which fire am I warming myself? The world’s fire or the Jesus fire? There is no other choice! One fire warms us, then and now, in rebellion to try to destroy the Lord and Saviour. The other provides His loving and changing rebuke to bring us to love Him before anything, including everyone and everything that warms itself around the first fire. The whole process of the cross could be said to be one of drawing Peter (and us) from warming ourselves at the world’s fire to being set on fire by the Lord’s fire. At the first fire Peter let the Lord suffer alone, denying Him. In John 21 Jesus set Peter on fire with His warmth. Then in Acts Peter would go out again with the Lord’s fire in his heart to preach to that hostile world.

“In between were two life-changing experiences: Peter’s tears and Jesus’ cross. When your tears of remorse mingle with God’s forgiveness, the result is always losing your guilt and finding new joy!” (Word For Today).

The Peter events here have essentially to do with dealing with failure in ourselves. He has been the confident one, the one who first gives the answers and who draws the sword. The spokesperson, the quick answer man. Now he denies the Lord and therefore he fails in the role that he has claimed. He fails in his own eyes and those of the other disciples – in fact in the eyes of all but Jesus! The issue becomes how he will deal with that failure, and how he will respond when Jesus meets him in that broken state? That kind of response is at the heart of walking with the Lord in a successful way, because it is at the heart of the dealings of God regarding the independence in our lives.

“One day Peter would prove a fine leader but first he had to learn the limits of his own strength. Only then could God use him. Only then would he understand that the greatness of his fall would be more than matched by the greatness of God’s restoring grace (John 21:15-19).”

Have I experienced that place of brokenness before the Lord in my life? It is, strangely, a wonderful place. It has a life-changing message for us. “As we shall see before this story is over, there is life after failure, and grace to restore us after we have done the unspeakable. ‘Oh, the depth of the riches of the wisdom and knowledge of God! How unsearchable His judgements, and His paths beyond tracing out! ... To Him be glory forever!’ (Romans 11:33,36). ‘The cross before me, the world behind me – no turning back!’”

The alternative is so sad, so dark. “Both the Jewish leaders and the Roman procurator were so preoccupied with their own agendas that they were blind to the fact that the most important event in the history of the world was unfolding before their eyes – and they were complicit in it. The Jews, scrupulous about avoiding defilement, were concerned about eating the Passover, blind to the fact that the true ‘Passover Lamb’ (Luke 22:7) was standing in front of them.”