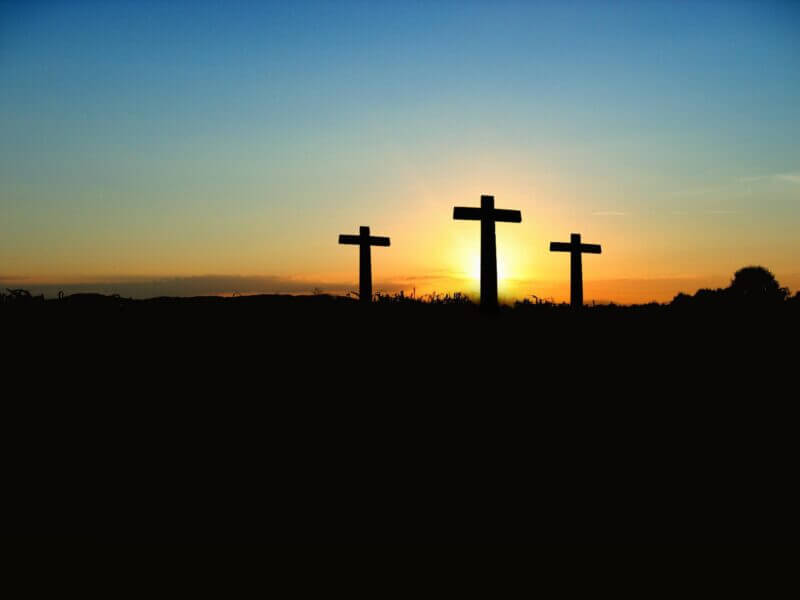 John 19:16-30 contains John’s account of the actual crucifixion of Jesus. It is surprisingly economical (John misses out details recorded by the other gospel writers) but it is also so powerful. John’s invitation is to avoid reading quickly through the verses, but rather to stand before the cross of Jesus and stay there and meditate on his words.

Take for example verse 22. “They divided My garments among them, and for My clothing they cast lots.” Jesus was in effect stripped naked in public display on the cross. But there is a massive and eternal exchange taking place there at the cross. John Stott sums it up when he writes “All other religions but the Gospel save us the ultimate humiliation of being stripped naked before God.” In other words all we bring is our wretched sin, our rebellion, our hellish darkness, our own nakedness before God. But Jesus took our place and paid the price in full.

“They removed all of His clothing. They divided these final possessions equally, and gambled for the seamless undergarment. The literary record seems so detached, but its plain meaning is that our Saviour was left to hang as a common Roman criminal: naked, exposed to the elements, and to the eyes of His adversaries, His friends and His grieving mother.”

Behind all of John’s writing lies powerful fulfilments of Scripture. These horrific events were not random nor out of control. The sovereign Lord God processed every detail, they were all astonishingly pre-planned. “John stresses how even small details in the story of the cross reflect the mysterious sovereignty of God, for they fulfil Scripture. i) First, the division of Jesus’ clothes echoes Psalm 22:18. ii) Second, when Jesus states that He is thirsty and is offered wine vinegar, this might reflect v15 of the same psalm, though Psalm 69:21 seems the clearest echo; in asking for the drink, Jesus once again shows that He is not entirely at the mercy of events. iii) A third reference to the fulfilment of Scripture comes in v37 of tomorrow’s reading: the picture of Jesus crucified by a public road, with His enemies coming to gloat (c.f. Mark 15:31-32), calls to mind Zechariah’s prophesy, ‘They will look ... on the One they have pierced’ (Zech 12:10). iv) The fact that Jesus’ side was pierced to determine that He was dead shows, from John’s perspective, that Jesus can be our Passover lamb, because none of His bones were broken (v36 c.f. Exod 12:46). As Paul will later proclaim, ‘Christ, our Passover lamb, has been sacrificed’ (1 Cor 5:7)” (Mike Archer).

This is grief yet victory richly mixed. “It is hard to escape the impression that John intends us to see the cross of Jesus not as a defeat but as a coronation. He is enthroned – lifted up – on the cross in order to give eternal life to those who believe in Him (John 3:14-15).” “By that cross, He ‘disarmed the powers and authorities, He made a public spectacle of them, triumphing over them’ (Col 2:15). That means that the potential is there for every man. No one is ever so bound that he cannot respond if he wants to.”

“One of the most significant words in John’s account is the single word uttered by Christ on the cross: ‘Finished!’ … Jesus knew His work was done, He had accomplished all that His Father had sent Him to do (John 4:34; 5:36; 17:4).” “Papyri receipts for taxes have been recovered with the word tetelestai written across them, meaning ‘paid in full’. This word on Jesus’ lips was significant. When He said, ‘It is finished’ (not ‘I am finished’), He meant His redemptive work was completed. He had been made sin for people (2 Cor 5:21) and had suffered the penalty of God’s justice which sin deserved.”

“The shout from the cross is a declaration of victory – the work of salvation is done, the slate is wiped clean, the debt is paid. Our only responsibility is to trust that complete and sufficient work.”
How deeply is His compassion for us revealed. “How it must have tormented Mary to see her Son strung up like a common criminal on a cross. She, more than anyone, realised the terrible injustice that was being done right there on Calvary, for she knew that Jesus was not only her Son – He was also the sinless Son of God... But in those last hours upon the cross He thought of her future comfort and security, and this fact must have helped staunch some of the wounds inflicted upon her heart by that scene on Golgotha (vv25-27).”

There is so much more. Spend time this Good Friday, using John’s words before the cross of Jesus, to draw nearer to Him.

Read Next Post - He Took His Time But He Made >>