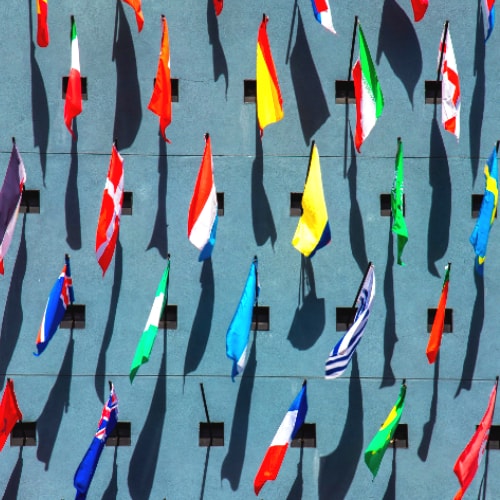 The World on Our Doorstep

Not everybody is able to go on short-term mission trips to immerse themselves in a cross-cultural experience. But that doesn't need to be a barrier!

Two of our interviewees (Jen Bishop and Pete Askew) have given a perspective that God has already brought the nations to us! We don’t need to travel out in order to be reaching the world – the world is on our doorstep…

It’s true - the nations have come to us, but sadly they have largely been marginalized, even by the church. Few have felt embraced or been well integrated into Western society. Even to the second and third generation this largely continues to be true. This has led, as David Cameron put it, to the “failure of multiculturalism”.

“We are losing trust in each other and in the future. Feelings of frustration, powerlessness and a loss of belonging are making us vulnerable to ‘us versus them’ stories, which turn us against each other. Social media is magnifying the loudest and most extreme voices.”

Is it any wonder, then, that most withdraw into their own cultural ‘bubbles’ and have no interest in mixing either?

There is no doubt that people from other cultures are going to continue to come to the West as migrants, refugees, foreign students, or skilled workers, and from the population at large they will most likely continue to get a poor reception. But we can get involved! Nothing counteracts the general negativity like a friendly smile, a kind word and showing an interest. There may be some barriers of suspicion to overcome, but genuineness and persistence can usually win through.

Political correctness does nothing to correct the negative trend! Just telling people that they must not be offensive does not help them be friendly and welcoming! We have a young friend who has just returned from years of working cross-culturally in Asia. She spoke of her objection to the words ‘racial and religious tolerance’. “I don’t want to be tolerated – and nor do I want merely to tolerate others,” she said. “I want to go out in friendship to get to know and really understand people who are different from me!” That surely is what is needed, not more regulations!

What it might take to dismantle the barriers in us, so that we start reaching out across the cultural divides in our nations. Ross and I were reading Acts 10 recently – the first example we are given of a total ‘outsider’ Gentile (not a proselyte like the Ethiopian in Acts 8) coming to faith in Jesus. One thing that struck us afresh was that Cornelius, the Roman centurion, was absolutely open to receiving the gospel message when it was preached to him, but Peter had a terribly hard time being ready to give it! The barriers were all in him, and it took a three-fold vision, a direct command and then the Holy Spirit actually interrupting his sermon for him to take on board that the gospel really was for the whole world, not just the Jewish people!

So how about us? Check out this quote from a Scripture Union writer:

“Last year a meeting of church leaders involved in church planting in London revealed that each of them was planting churches among people just like themselves and none had crossed a cultural or class boundary in their evangelism.”

Is that true of us and our church? And do we sometimes detect resentment in ourselves against outsiders who we perceive as taking ‘our jobs’ and changing ‘our country’. Note that Peter in Acts 10 had to overcome not only his prejudice about Gentiles but also his nationalistic resentment against Rome as an occupying force, which is what makes this story such a powerful one for us.

Personally, I recollect some lovely cross-cultural encounters we have had over the years in our own UK context. They cost us little but rewarded us richly:

So, my 2021 challenge would be… get ready for a cross-cultural adventure, right where you are! I promise you, you’ll be richer for it.

If, as Jen very eloquently said in our interview, God has brought the nations to us, let us do what we can to share the good news with them. In fact, before even considering going overseas to do this, why not give it a go at home first?

Let us know how it goes – we would love to hear your stories! Comment below or contact us.

2 comments on “The World on Our Doorstep”